The sense of self-worth, value, and identity are closely associated with that person’s job or occupation. Everyone needs an adequate income to survive. Everyone wants to be a part of something bigger, be valued for their contributions, and be a part of a community. Work provides these and more. That is why it is much more than just an economic catastrophic event when someone loses their job due to a work-related accident. They go from being productive to thinking of themselves as an “INJURED WORKER.”

What is not commonly understood in the workers compensation claims community is that when workers lose their jobs, they go through the same emotions as when they lose a loved one. The five stages of grief.

The five stages of grief are denial, anger, bargaining, depression, and acceptance.

This paper explains the five stages of grief and how it applies to injured workers when they lose their job.

By understanding this phenomena, medical professionals and claims examiners can do a better job of recognizing the behavior and support the worker in dealing with their pain.

The first stage denial helps the injured worker minimize the overwhelming pain of loss. As they process the reality of the loss, they are also trying to survive emotional pain. In the moment of loss, the worker’s reality shifts completely. It can take their minds some time to adjust to this new reality. They reflect on the experiences they shared with their co-workers. They find themselves wondering how to move forward in life without their job.

The worker has may be overwhelmed by the extent of the information to explore and also have to deal with painful imagery to process. Denial attempts to slow this process down and take them through it one step at a time, rather than risk the potential of feeling overwhelmed by their emotions. Denial is not only an attempt to pretend that the loss does not exist. It is a coping mechanism to help the worker absorb and understand what is happening.

It is common to experience anger after the loss of a job. The worker is trying to adjust to a new reality and is likely to be experiencing extreme emotional discomfort. There is so much to process that anger may feel like it allows them an emotional outlet.

Anger allows the injured worker to express emotion with less fear of judgment or rejection. Anger does not require the worker to be vulnerable. It tends to be more socially acceptable than admitting the worker is scared.

Unfortunately, anger tends to be the first thing workers feel when they begin to release emotions related to loss. The anger can result in the worker feeling isolated because the worker can be perceived as unapproachable by others in moments when they could benefit from comfort, connection, and reassurance.

When coping with loss, it is not unusual to feel so desperate that the injured worker is willing to do anything to get the job back. Losing a job can cause the worker to search for any way they

can avoid the economic pain they are anticipating from loss. There are numerous ways they may try to bargain.

When bargaining starts to take place, the worker is often directing their requests to a higher power, or something bigger than they can influence to get a different outcome. There is an acute awareness of their vulnerability and humanness in these moments when they realize there is nothing, they can do to influence change or a better result. The overwhelming feeling of helplessness is the result. Bargaining also tends to focus the injured worker on his/her personal faults or regrets. People who are “bargaining” tend to make the drastic assumption that if things had played out differently, they would not have lost their job.

During the experience of processing grief, there comes a time when the worker’s imagination calms down, and they slowly start to look at the reality of their present situation. Bargaining no longer feels like an option and they are faced with what is happening.

As their panic begins to subside, their emotional fog begins to clear, and the loss feels more present and unavoidable.

In those moments, they tend to pull inward as the sadness grows. They find themselves retreating, being less sociable, and reaching out less to others about what they are going through. Although this is a very natural stage of grief, dealing with depression after the loss of a loved one can be extremely isolating.

When the injured worker comes to a place of acceptance, it is not that they no longer feel the pain of loss. However, they are no longer resisting the reality of their situation. And importantly they are not struggling to make it something different. This is when the worker stops thinking of themselves as a worker and begins to think of themselves as “an injured worker.” Sadness and regret can still be present in this phase, but the emotional survival tactics of denial, bargaining, and anger are less likely to be present.

It is important to note that people grieve differently and may or may not go through each of these stages, or experience each of them in order. These stages often may be blurred. The person may move from one stage to the other and back again before fully moving into a new stage.

There is no specific time suggested for any of these stages. Someone may experience the stages quickly, such as in a matter of weeks, whereas another person may take months or even years to move through to a place of acceptance.

The five stages of grief and the injured worker

The pain of the loss of a job is unique to each injured worker. After going through the five stages of grief this results in the worker believing that they are disabled rather than a productive member of society.

One of the worst aspects of the workers’ compensation system is the misplaced financial incentives. Unfortunately, these incentives all too frequently result in creating disability rather than resulting in a productive return to work. The best examples of this are when a treating doctor focuses on the business of medicine and not the correct treatment of the injured worker or when the applicant’s attorney attempts to maximize the disability (to maximize their income) rather than focus on return to work. 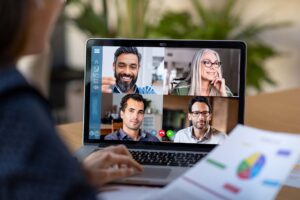 Zooming into the future

Balancing Children at School and Parents at Work

This website uses cookies to improve your experience while you navigate through the website. Out of these cookies, the cookies that are categorized as necessary are stored on your browser as they are essential for the working of basic functionalities of the website. We also use third-party cookies that help us analyze and understand how you use this website. These cookies will be stored in your browser only with your consent. You also have the option to opt-out of these cookies. But opting out of some of these cookies may have an effect on your browsing experience.
Necessary Always Enabled
Necessary cookies are absolutely essential for the website to function properly. This category only includes cookies that ensures basic functionalities and security features of the website. These cookies do not store any personal information.
Non-necessary
Any cookies that may not be particularly necessary for the website to function and is used specifically to collect user personal data via analytics, ads, other embedded contents are termed as non-necessary cookies. It is mandatory to procure user consent prior to running these cookies on your website.
SAVE & ACCEPT

Bill currently serves as Chair of the Audit Committee on the board of the State Compensation Insurance Fund, California’s largest provider of workers’ compensation insurance. He was appointed to the board by Gov. Arnold Schwarzenegger in 2010 and reappointed by Gov. Jerry Brown in 2014.

He participated in the design and implementation of landmark legislation and regulations to bring greater benefits for injured workers while saving over 167 billion dollars for the employers of California. Prior to serving on SCIF Board Bill spent ten years as the Chair of the California Fraud Assessment Commission.

Zachry was the Group VP of Risk Management at Safeway / Albertsons for fifteen years. While there he was awarded Risk Manager of the year by RIMS, as well as workers’ compensation professional of the year from CCWC in 2016. He also spent three years as a Senior Fellow in the Sedgwick Institute where did research and writing on many risk management issues.

Bill continues to support the industry as a significant contributor in many aspects. The one which he enjoys the most, is writing his “Simple Ideas for a complex system blogs that drive awareness, provide thought discussions, and lead positive outcomes and positive change. He believes that it is through these articles that the industry can change, improve and learn.